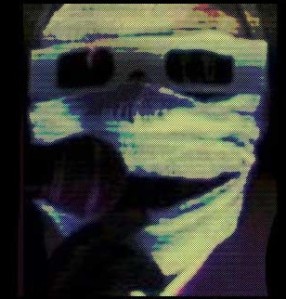 The most active page on this site for several months now has been the comment section to a Randy Prozac (aka Goat Worship) post.

It has been alleged that Randy had actually died some months ago. A newspaper clipping of his demise surfaced, and a mysterious girl named Britney Morgue was said to have taken over his website, which thankfully has remained fully functional and even occasionally updated.

While rumors that he had possibly faked his own death and was perhaps institutionalized were also suggested, it seemed many were convinced that Prozac did indeed exit stage left. Sadly it appeared no more works would surface, and many were crossing their fingers, hoping that Britney would at least keep the remaining ship afloat.

Odd back and forth comments have become a daily occurrence in the last few months which only fueled the mystery further.

“honestly, when i come to the Internet, i expect to find The Truth, and to see this level of obfuscation is just terribly disappointing.

i don’t think i will ever have the same faith in comments again.”

Today though, it appears as if Randy has stepped forward. Not only does he declare he’s still here (alive), but in extremely rare form he tilts the mask up and takes a few moments to explain the origins and motivations of his massive collection of work, both as a member of the video art group Goat Worship and his solo absurdist video projects that have followed.

For those that don’t know (and unfortunately, not to mention shamefully, this includes many, so-called, underground and experimental film curators) Randy Prozac and his former project Goat Worship, have put out some of the strongest underground absurdist cinema in the past decade, which in turn Randy has archived while adding new works, all available to view on his website SentimentalCorp.org . The website alone is arguably one of the best personal film sites in internet existence with it’s self hosted videos, interesting-engaging and mysterious navigations, as well as NO youtubes, NO vimeos, and thank god no stupid ass “facebook/twitter/tumblr” I-“cons” for the delusions of social misery-media “glory”.

To put it another way, if people still cared about art, specifically current art in the subversive vein, Prozac would have been celebrated a lot more through alternative media, articles, interviews, and screening requests. But we live in a dark period where most of the celebrated subversives of the past now spend more time curating their persona on facebook rather than creating new works or seeking out true underground works of others.

It’s perhaps because of this black-out that Prozac’s sudden surfacing is a rarity, as well as a relief for his well being, even despite his new found flip off to still admirers of his work.

And having said this, his statement below signifies a moving on, sealing the Sentimental Corp lid, having come to terms with the motivational madness which fueled the fire. Future work from Randy seems uncertain, probably unlikely, but if his ‘mask back on’ last sentence gives a hint that something might be brewing, it would likely aim to be something completely different.

to whom it may concern,

the materials i produced were a method and process to deal with pain. i personally have no interest in goat worship or any of the video materials i created, they were made only as a ‘means to an end’ and were never fully intended to be shared, but i did share them and they remain an attached stain on me even though the internal matters have since been processed and released..

i don’t believe that clinging to aspects of the past is a healthy pattern to develop, especially when trauma and pain were involved.. i don’t believe in holding onto pain, or embracing negativity.. i once did.. i once thought i needed it and it convinced me that i needed it.. but i don’t and to be honest i hate most of the people goat worship attracts because they are often parasites who revel in their own suffering and the pain of others. i understand because that was the state the materials were created in. rather than project it onto others directly i opted to create a controlled platform where i could spit out the poison.

i didn’t want the pain i went through to.. the hatred i felt.. i didn’t want it to simply remain within me.. to crystallize into a state of being and become permanent.. cementing me into oblivion with ‘me’ projecting how ‘it’s everyone else’s fault how i feel’.. i am accountable for how i act and react to my own emotions.

the world has too much selfish cruelty and too many people who’ve developed no sense of compassion. people who are mental/emotional sewer rats looking for any piece of rot to validate why they should remain in that fixed state of perpetual bitterness and automated loathing.. i am aware that i have expressed and endorsed hatred and misanthropy and that it was a reactionary aspect of myself, but it was not the core.. and as i said, it is the part of a person that holds onto all the manufactured reasons why i am justified in feeling my hate..because it makes a person feel the illusion of strength.. but it’s not a real strength.. letting go of it was.

i leave the materials (goat worship etc) online because maybe they can serve some function, perhaps those that resonate with that toxic state of being can see the process i went through in order to let go of it, although i doubt that, i know it would be easier to mock me, or to laugh like a heartless sociopath and feel nothing but juvenile emotional cancer. i know all about it and good luck with that.

the materials i produced were also a reflection of a sickness that i see, but that doesn’t make them any better than what they articulated through visual metaphor. i can only hope they don’t contribute more to the neutralization and desensitization of peoples hearts and minds, even though i know that they probably do.. i chose to make fun of my pain and that is what goat worship primarily was, i laughed at the hurt to reduce the impact of it within myself.. i would not want it to be viewed externally as a form of validation or celebration of the negative aspects of the self..even though it was that at the time, a transmutation occurred and i am still working through the residual radiation.

now i put the mask back on..