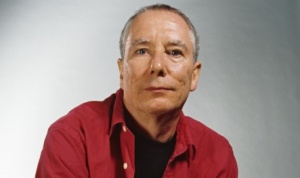 Mike Kelley was an artist – drawing, painting, performance, installation and video, whose work often had the Absurdist vein running through it. He became “known” in the “art world” in the 80’s/90’s, garnering much recognition, having his work shown in major galleries/museums.

Despite being accepted and hoisted high within the realms of said institutions, ultimately it may have been the societal Absurdism overall, especially in relation to the art world, that leaned him towards calling it quits. He died yesterday, apparently killing himself.

Mike Kelley was a friend of a friend. I saw him around 6 years ago and have around 2 hours or more of Kelley on videotape, as part of a live discussion/interview. I never forgot, and often times it re-occurs in my head, this one point in the interview, towards the end, where Kelley breaks down. The topic at the moment was abuse, and with much of Kelley’s artwork the breakdown was open to one’s own interpretation. Was it his own abuse? Abuse brought onto him – abuse in general? And then the sudden break down, a burst of letting go, almost uncontrollably; it shocked the hell out of me.

As is usually the case, depression has been hinted at the reason for calling it quits. Perhaps no longer feeling it worth the efforts to channel it through his art, he possibly decided then, that since there wasn’t anything left, it was time…

Since many of our resident crew here, this flock of Absurdist Video Artists, are, to be honest, fucked up in their own right, dealing with similar issues, it’s likely after hearing this news, many stopped there manic’ness for a moment to reflect on their own potential outcomes once the music doesn’t feel like being played anymore.  It’s taking me a few hours and counting to process this. We often think that art is the answer, the remedy to avoid going this route. An alternative or a needed supplementation for the meds. And now we see after all of Kelley’s work, the outcome was what it was. For added frustrations we are all left with Kelley’s final comments, apparently from only a week ago, the last sentence being the most pertinent.

But Fontana, who saw Kelley last week for dinner, said that Kelley’s art-world accomplishments had a price, as he had been actively struggling with what it means to succeed in a world that has become more materialistic and foreign to him.

“He had a deep discomfort in seeing what the art world is now,” Fontana said. “He didn’t like the fact that everything has become so corporate. He said to me: ‘If I were to start now, I would never become a visual artist.’

“If I were to start now, I would never become a visual artist”.  Great.

A CALL TO ARMS.

Really though, this last sentence was the reason that this site, and this movement, was brought together. And why it needed, and needs to continue, to solidify itself.

Minus the Trecartin exception, we realize the over glorified institutional art halls aint going to be allowing most of us in anytime soon. Yet we still exist, we still create, many of us constantly, and even if you do “get in” and receive the art world accolades, the suicidal tendencies still lurk right around the corner, maybe even more so being locked inside the machine. The reality of the overall fraud, both in the mainstream and in the art world, you really can’t escape, so why try.

More the reason to Fuck it All. To have fun; share, relish and support one and others work. Understand, and always remember, the core reality is truly, Absurdism.

Understanding this starves away not only the temptations to call it quits, but also the “where in the fuck am I going with this” reoccurring mindfuck that likes to enter the head after looking back on the hours of absurdness poured into video piece after video piece.  Where’s anyone going with anything. The game eventually ends, hero or loser, outsider or insider, dirt is dirt and that’s where we all end up. In the meantime it may as well be about creating, and for us through that channel of the human absurdist existence.

Kelley wouldn’t start as a visual artist today  because the hope that existed when he was coming up in the 70’s, the idea that maybe art would matter in the future, just doesn’t exist today. It’s way over the top absurd how far out of hand things have gotten. The gluttonous flooding of crap is piled so high that even in the high speed easy access digital landscape (or because of it) it’s still difficult for the art to seep through and when it does it’s usually through a fluke crack that miraculously penetrates the system.

What’s relevant now is creating small art-fuck eco villages (whether online or physical) to hang out at and participate in. Let everyone else eat themselves.

There’s nothing left to aspire to as far as Mike Kelley acceptance/recognition. His death is a reminder of this, as well as a call to action to start fresh, with new direction, and a different hope; focusing on creating and not allowing the fraudulent seemingly never ending materialism to do us all in.