SEEMINGLY OUT OF NOWHERE the internet has recently been graced with the presence of THROWGOD. A potential internet phenomena who is just as much video artist as he is viral commodity, THROWGOD has digitally emerged from who knows where and is owning the internet of 2020 with his nonstop daily uploads which are mesmerizing, mysterious, hilarious, and absurd.

Without explanation, a frenetic blizzard of videos have recently emerged, and continue to emerge daily, on the TikTok platform. They feature a man, often shirtless, sometimes wearing a mask, sometimes a wig, throwing a football from great distance into a net containing three ”catch holes”. Every throw recorded, the ball makes it into one of the three holes. After the throw, sometimes before, commentary is made by the man, as well as occasional voiceover at the end. 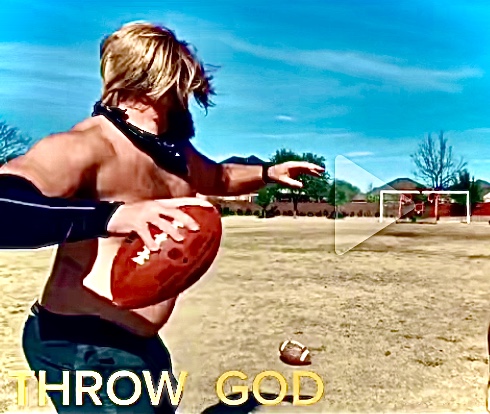 Various levels are at play here. ThrowGods amazing athleticism, his hilarious and often non-PC commentary, his occasional batshit crazy manic episodes, his artistic and experimental edits, and of course the mystery of who the fuck this guy is.

His skills appear legit enough to likely have been a former high level quarterback. Perhaps someone who had success, then life gets in the way, and now he returns to the core – his love for throwing.

Yet it seems his age is still within range for a potential professional stint back on the field. Matter of fact most comments to his pieces are usually “you should play for the XFL”. Yet it’s the Zen of ThrowGod who rebukes such comments by telling his audience that this is his nirvana; an open field, a net, a half dozen footballs…and throwing.

Indeed this is his stage. It’s where he comes alive, improvising one-liners, creating characters, all while strenuously and accurately heaving a football from ridiculous distance. With laser like precision it lands perfectly in the net, again and again and again. 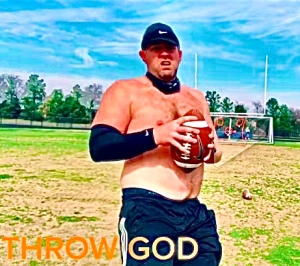 ThrowGod recognizes his greatness; both in his arm and in his gift for improvisational gab. “Believe in Yourself” is a mantra of ThrowGod, which he repeats to himself often. The mantra has been effective. He is an artist who has found his medium, and the perfect, most relevant outlet for expressing it.

Between his daily throwing sessions, and his nightly video editing, THROWGOD is currently one of the best, and most prolific, video performance artists out there.

To witness the art of ThrowGod, go to his TikTok account – @throwgod

His website is http://ThrowGod.com
(be sure to check his blog out, he has the gift for written word as well).