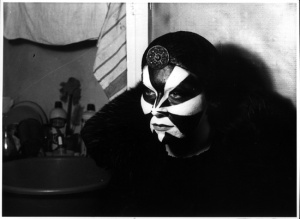 Another longtime experimental filmmaker with Absurdist leanings takes the plunge to the nether worlds. At 88 Jeff Keen passes, as he leaves behind many forms of art from painting to poetry, and most notably, 70 some film works, a number that may not sound impressive to the new video maker generation who clog their video sharing channels with 100’s of “works”, but these, mostly made on film (expensive), show some time and care in their making, with added attention to tricks and genuine experiment. It’s an impressive and I would imagine satisfying number of completed cinematic art works.

Of note was his steadfast DIY style, utilizing friends and family, found footage and objects, as well as himself in and out of costume on camera.

Keen is primarily known as a legendary underground filmmaker whose work and activities coincided with the emergence of expanded cinema. He was one of the original participants in the 60s at the London Filmmakers Co-op. The BFI and later the British Arts Council supported and enabled Keen to make films and devise a multitude of drawings and paintings. During this period, Keen maintained jobs as a landscaper in the Parks and Recreation department of his hometown, Brighton, and sometimes as a postal worker delivering mail. The artist made movies primarily on weekends with his family and friends in an ensemble cast and his painting and drawing studio was for 40 years a repository of props and art that accumulated to extraordinary effect that has been fully documented – from Experimental Cinema.

Keen seemed to garner recognition in the British experimental film world, but like many  Absurdist Video Artist’s here, his true appreciators we’re those outside the wall’s of avant institution.

“his work was often more appreciated by skaters and punks than followers of the canonical avant garde.” – the Guardian UK

Yet in the U.S. he hasn’t seemed to garner much recognition at all. In 1999, back when Underground Film Festivals mattered, the New York Underground Film Fest showed some of his work, and earlier this year his first solo U.S. gallery show, at age 88, was in New York at the Elizabeth Dee Gallery.

The Guardian has a good obit write up on Jeff Keen, written by someone who worked with Keen in 2008 to put together a massive DVD box set of his work. Here’s the Guardian article and below are some amazing shorts from Keen, from his 1967 most screened work “MARVO MOVIE”, to a later work in 1995, an interesting behind the scenes piece, and a 25 minute interview from recent years.