AVA’s own American Films have taken their act to the stage in the form of theater, operating under the moniker “COLLAPSE THEATER”. Imagine their short films in stage play form, but much more tightly written and with a slew of additional actors, many seemingly itching to dive into the Absurdist material that Amercian Films have been experimenting with for over a decade through film. 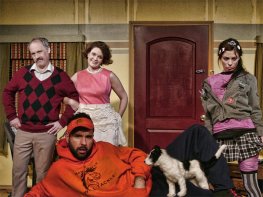 But the films haven’t stopped. Recently they had a 2 week run for their play OUTSIDE. And premiering at the last few shows was the new short film “TCN – THE COMMERCIAL NETWORK”, featuring familiar faces from classic Amercian Films pieces.

Commercial making and commercial watching have grown to unreal levels. Some commercials now resemble that of short films with budgets in the millions. Others hawk unbelievable products in fast cut music video style. From Corporations to snake oil salesmen, everyone’s in on the game. And people are watching. The Superbowl nowadays is watched by millions of new viewers, but not for the actual Superbowl. For the premiere of all the new commercials in between.

It only makes sense then that the latest trend would be to eliminate the programming altogether, and instead just create a network devoted entirely to commercials. While cable producers, network execs and the like are slow to jump on this, Collapse Theater is ahead of the pack with the introduction of “TCN”, The Commercial Network.

The short begins with mind numbing 80’s nostalgia viewing by a trio of couch potato TV addicts. Yet quickly things devolve into a smorgasbord of commercials brought to you by TCN, at the insistence of the younger and dumber couch potato who seeks a stronger numbing fix of something more frantic; something that will really fuck him up. TCN delivers.

Eventually the viewers dissolve into commercials themselves; reciting one line jingles, made up commercial catch phrases. The viewer and commercial eventually become one as they allow themselves to be consumed by the visual and audio propaganda assault.

The modern Little Red Riding Hood, reared on singing commercials, has no objection to being eaten by the wolf. – Marshall Mcluhan

If smokers could have instant downloadable easy access to x-rays of their lungs, they could see all the gunk buildup and may re-think their nicotine intake, while taking steps to detox.

Similarly if commercial TV watchers could see an x-ray of their subconscious they would be presented with a similar image of nasty gunk buildup in the brain. And likely they would reach for the bottle of bleach to pour in through the ears hoping it will reach the brain and disinfect the media mildew, unclog the mind altering buildup.

Basically, the short film “The Commercial Network”, is that x-ray.

The film shows the real effects of what commercials do to the brain. How all the highlights create that buildup of gunk. After watching “TCN” you instantly feel infected. Nothing gets neatly processed inside our heads when we subject ourselves to a barrage of visual adverts, all designed to forcefully tell us how inadequate we are, how we are lacking, how convenience should be king, and how popping a pill will make it all better.

As with smoking – we know it’s not good, it’s easy to fall into, the bad effects invisible – commercials are the same but easier to inhale and the effects don’t get a surgeon general warning.

As TCN reveals, the commercials are a drug, which eventually need to be countered by another drug in order to cope and feel better.  And if you don’t leave the room or medicate yourself to a far off island, today’s quick cut frantic back to back commercials of corporate snuff, pill popping propaganda and padded butt panties, will easily leave you suffering from similar effects to that of a horrible acid trip.

See what you are really ingesting. Watch the The Commercial Network.